The confusion about the feminine - Divine Mother 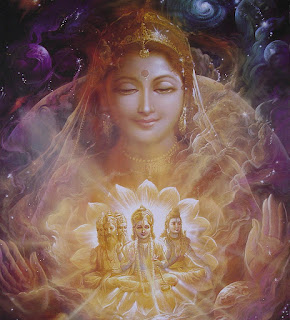 Our work is to bring the sacred feminine within as an unshakable truth.

The symbol of the woman who is anchored in this energy is that of a strong, determined woman who knows her limits but knows of her inner strength.

We do not say about a force that drags, but rather that which radiates justice with love, softness and sweetness.

It is a state which, despite the support of an unshakeable truth, is not rough, but gentle, cherishing, of a truth which is respected for its balance, for its posture, but which at the same time shines the maternal gaze of love and unity.

To be female, for men and women, is not to create equality through something that is unbalanced, which is unequal. To be feminine is to breathe this authenticity that balances the world with a force that puts everything in its proper places.

They need to understand, children, that their world is in an imbalance precisely because they usurped the feminine, but this is not resolved with hatred, struggle and imposition, but anchoring this force of the feminine in every human being on this planet and especially in women.

Thus they may become the symbol of the strong, courageous, resolute woman who knows what has come and what she wants, but without losing the sweetness, the light and soft posture of what is to be feminine, the cherishing look of a Mother who loves above of everything and in spite of everything.

The posture of the one who is in balance with the sacred feminine is smooth, gentle, fair, because it recognizes this inner strength without causing pain and suffering.

Being feminine has to do with that balance, with this strong, but unbreakable, posture of justice and love.

The injustice that prevails in their world occurs because they learned to do justice on the wrong side, fighting it with the creation of other injustices. And this is not justice. To be just is to be right, knowing what you want, having conviction, but returning the balance with love and gentleness, just as a mother does of her child.

It is to seek justice for good and not for revenge. It is doing what needs to be done, but for the sake of the one who goes astray. There is passivity, patience, and a true search for transformation, to become one who strays from the rectum, but without pain and waiting for the time of his maturation.

The imbalance of the sacred feminine is what drives the world to all this confusion that passes before your eyes, for without it you do not know of your own truth.

All those who attend power in their world, both men and women, are the pure representation of the imbalance between the sacred feminine and masculine. They represent dishonesty, imposition by force and arrogance, wanting for oneself without the look of the common good.

All this, my children, who live for centuries, is the result of disrespect for this sacred energy that is the love of the Mother / God.

They forgot in their scriptures to balance and honor the sacred feminine, to say in the name of the Mother and the Father, and with that the woman ceases to be honorable, ceases to be the symbol of that balanced force, of this loving and just courage and Transforms into a woman who strives to achieve balance by seeking equality with that which is in imbalance.

But the strong woman is convinced to maintain that feminine love and to be the mother who educates her children with the posture of truth, loyalty and integrity. Of the certainty of good for love. This is being female!

Being a woman goes a long way from being fragile, but it means just that unshakeable truth, but also just and balanced in love.

Be at peace, children.

I am your Divine Mother.

Source: http://peaceandtransformation.blogspot.com.br/
Posted by Michele Martini at 5:32 AM