Radiate your light - Francis and Clara of Assisi 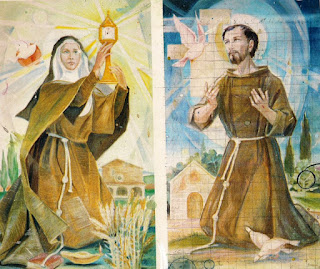 We recommend reading to the music: Sweet is Feeling - Instrumental

The love that permeates the hearts of men is unspeakable in the face of the threat that any reality, as to the doubt of the existence of love, may apparently prevail.

Something as beautiful as a being of light, a child of creation, wherever you are, in the harshest and hardest environments, will always be made of love and perhaps they are simply able to look and wonder where is this noble feeling, that in the most contrary attitudes, takes so much pain and suffering.

Realize that within this seemingly unloving experience there is, at bottom, an opportunity for the supreme fuel of consciousness, love in its purest essence, to manifest itself from the inner darkness.

The hearts of those who are silent before life, which close themselves to the expansion of themselves, is the purest feeling of the immersion of consciousness in the material world. Such is the immensity that apparently the heart closes in its light. But the spark of hope, which is the energy of God I Am in your hearts, will never go out. It may be muffled, but never locked to the point of shutting down. It stands there, gleaming, awaiting a breath of the Creator, to manifest in love, for so is the nature of all.

Love never ceases to exist, it can even manifest itself in an unrelenting way, but as it is released, in small flows, it begins to pulsate, moving the heart to shine and remember its light.

But there are those who will say that the love of one's heart is extinguished, such is the brutality of a being, but those who believe in it deceive themselves. For how could a being of light fail to be made of what is its raw material, love. All return only to love and nothing else exist in the world. That is the only truth.

After shifts and retreats, within their own inner darkness, they will again shine forth in that purest feeling that exists in all creation. And there is nothing that modifies this reality.

Now I tell you that what you have seen and what you will see, what you will see in the next times will be precisely this effect. To see love return to shine in many seemingly dormant hearts. But for this, children, must expose all the darkness, that hid in the rubble of a reality, that existed only to bring the soul to experience the state of apparent destitution of its light.

Soul without love? How could one think of water without being water? This is what they have created, a reality so unreal that it has transformed something that it is into something that apparently cannot be. You are love, you have always been, but apparently you had to cease to be, so that you could lead the soul to the limit of creation, to the limit of consciential immersion in matter, before the loss of consciousness itself. But now they return from an unreal world, where the inexplicable will return to their place of origin, palpable and visible love.

Be in love, be love, for this is the reality, and that is what you will see manifested, even if you look and do not see, it will be still that which will manifest in this world, and that will be the reality of the Age of Aquarius. So you go through the transition where the dark will appear, just so that love prevails.

Have patience, children, and believe those words. All they experience, is to bring back to their own experience, a little more than they are actually made: the purest love.

The moment of peace has arrived, the one that was so longed for by those who really want to see a world more colorful, more joyful and fuller of life and harmony.

Bringing this light, that infinite wisdom that is part of the essence of each, the world will overflow in harmony, in peace and fulfillment, we will see the dreams come true, a new truth to manifest.

There are those courageous, who bring with wisdom the voice of the heart that allow the true flow of their essence, radiating in their words, their gestures, their looks.

There are those who have chosen to be present, in the environment where they live, actively participating in what is human being, what it means to belong to the environment, what it is to become one with life, one who is a complement of oneself, and nothing more.

These, my dear children, unite as energies to bring peace, even in the face of their own limitations, through the illusions of the ego brought by the constraints of the personality, but which has no strength before the union of hearts in the same purpose.

This is the purpose of the work of a group, of a congregation, which united in love, radiates and surpasses the light even though within the very tight mesh of constraints, which poses as an obstacle to the life of each one. But that is not an obstacle to love, which is radiated from hearts united in the same purpose.

The barriers are overcome because the light is fed between each one, which sustains the torch lighted before the experiences of overcoming the other, and thus each, united in a same love for charity, are bringing the manifestation of something truly glorious.

This glory, that light, will have no end, it will grow more and more radiate for all humanity, for there is no other way. While each of the hearts united in this purpose, who gives themselves to love, go through their own experiences of overcoming individual constraints, they become stronger. For the overcoming of one is the strengthening and wisdom of the other. All are completed and united in charity, bring more strength and peace.

The transformation into an era of peace, in the Age of Aquarius, will take place purely, in a clear form of constraints. For these will be accepted, cherished with love and received in peace in the heart. All, united in one, will bring the cherishing of the one who needs love, in the face of experiences of overcoming. And in this way, union will take place in one transforming loving energy.

Wisdom lives, in a pure and infinite way, when it is accessed through the union of each one of you in the same purpose. As long as one is involved in his own overcoming, the other will reach out and hold the torch of love and light on, revealing all the facts, letting learning take place, but cherishing with love.

So is union for something grandiose. That does not crumble, because it is based on the foundations of love, peace and access to wisdom through humility and charity.

Work sustained in love and charity, in faith and hope, brings the robust basis of something that becomes great, and shines in peace so that all seek the cherishing, where all will seek love.

They are several moments of learning and experiences, of contact with energies of the most diverse. But regardless of where they are, there will be the possibility of radiating love.

Inside a monastery, or even a Senzala, free in a field of flowers or inside a humble shelter cherishing the sick, from the densest energies and even gleaming in light when in contact with the higher energies.... In All environments, there is the possibility of generating love, because the source is in each heart and where a torch of love and hope is lit, there is still the possibility of lighting all the others, and forming an even greater light.

In the face of experiences of overcoming one's own restrictions, brought about by material experiences, they do not fall down sad and discouraged. Know that there will always be the brother who will keep the torch of love burning to cherish it. And the strength will come from the union, when the torch touches your heart, in need of love; the light will still shine brighter, even brighter. And so the light and the love will make the true transformation, in a new era of peace where you will no longer fear when you radiate love. They will be completely free only to radiate, without the fear of evil reaching them, for there will be no more space for the shadows. The light will take care of all the spaces of their hearts.

We are Francis and Clara of Assisi

Source: http://peaceandtransformation.blogspot.com.br/
Posted by Michele Martini at 6:25 AM