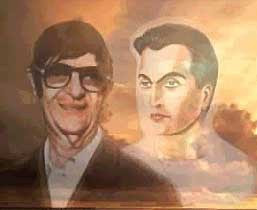 I was among you as a simple man. The one who had no identity, for I did not even know who I was.

I spent a lifetime searching for my Self. I did not know what the Higher Self was, I did not have the knowledge of you, the wealth of information you have today. And so I threw myself at the call of my heart.

I allowed my life to be carried away only by love. I surrendered myself into the arms of God. And my food was to see people happy, to know that I could at least lighten the wounds of their hearts with the words that came out of the writings.

I did not know where the words came from, but gradually I learned that it was not my ideas, but those that were part of the wisdom I already had, and I came to access it. Emmanuel helped me in this search, in this encounter with my true identity. And then you could watch the humble Chico scribe utter words of great wisdom, where it was no longer necessary to speak only through psychography, but where I learned to access my own wisdom contained in my soul records.

Emmanuel, like all the spirits that came to help me, gradually guided me to my true identity.

In the beginning, they were just the ones who carried the messages, I did not see it as a guide to get me to meet with myself. I was in search of my true identity. Something was burning in my heart. I could not understand why I did not feel complete and my heart felt the pains of burning, of burning. I did not know why I had this eagerness to look for something, but I did not know what it was.

My beloved brothers, spirits who brought me messages through psychography, were occupying my mind that sought for explanations, which was lost in the very quest for life. I did not identify myself with my work as a clerk, just as I did not identify with anything that was placed as an adjective after my name, but I only accepted, and it was good because I made my living. But I lived a light life only because the spirits were present in my life, to bring me examples of overcoming, of love and of liberation.

I learned how to spend several lives studying in the presence of several masters, with these beloved brothers, and also with those who came to seek help, where I saw my own pains, my own suffering in other personalities, only manifested in other ways, but The answers were the same ones that also cherished my heart.

Then I discovered that man who was born, and whom I identified with, the one I did not know, and I did not know if he was the clerk, or the medium, or the brother, or the son, or the friend, but he was just someone who He did not identify with any of these characters. He transcended all these Chicos, to then become something bigger. For I was strengthening myself, I realized that I was becoming something bigger, stronger, wiser.

So after many years, I no longer saw Emmanuel as anything other than me. I was him, and he was me. We were connected in the same energy, we spoke the same words. For he was guiding me through the personality which he presented to me, to my encounter with myself.

Emmanuel had no personality, the vocabulary he wore, his clothes, his way with me, was just a reflection of myself. He showed me what I was, on a higher level, which was the connection with the I Am. He was only there to lead me to meet the Higher Self, the true Self.

He was Jesus, you say. It was Jesus, just as he was Maitreya, just as he was El Morya, just as he was Saint Francis. He had no personality, he was only a reflection of my purest manifestation. And it was for me a guide to meeting my highest aspect. He connected me with the wisdom I already had, led me to meet all of my Self, in its fullness and complete in light and wisdom, in peace.

And so it was my learning in this life, disconnected from all personalities, but which I did not understand at that moment, I was only allowing myself to be led by my guides, following what was received as guidance, which I now understand to be an orientation that I came from myself to myself. For Emmanuel was the manifestation of my Higher Self, represented in a personality, for in matter it was only so I could understand the whole process.

And so I bring the example to all of you so that you understand the importance of disconnection with the personalities that are presented to you during your individual experiences in matter. And so that you understand and see in each one who presents before you, a teacher, who leads only one way, to show you the road of meeting with yourselves.

With these simple words, I leave my big hug with love.

Source: http://peaceandtransformation.blogspot.com.br/
Posted by Michele Martini at 4:11 AM