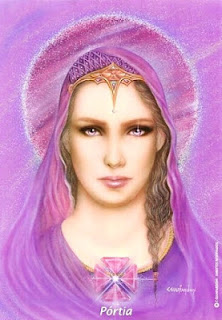 I am Master Pórtia, anchor in the planet the flame of transformation, the transmutation of the aspects that keep each of the beings bound to their own net of illusions that feeds the planetary mesh. I have been among you, for many lives, always in search of justice and equality. I act along with the energy of Master Saint Germain, bringing the divine complement of masculine and feminine energies, but which is only brought to completion on an energetic level in order to elevate into higher levels of transcendence of matter, where the I Am no longer More is presented as masculine or feminine, but rather the union of two energies for the sake of something greater. For the sake of transformation.
The dispensing house of the violet flame, brings to all beings the possibility of regeneration through the transmutation of their own constraints, already prepared to work them and to bring them together in wisdom, so that the union takes place in a single energy, which is The balance of the sacred feminine and the masculine, the balance between Yin and Yang.
The violet flame, brought by me and Saint Germain, promotes the union of these two aspects and elevation in I Am. By transmuting the constraints that prevent this union and elevation from full wisdom, which is not for the purpose of ascension, but for the transmutation and disconnection with the planetary mesh.
I bring as a member of the karmic council, divine justice, the application of the energy of justice in the form of love and forgiveness, the elevation in wisdom of the transcended aspects of matter, and which are then united in high energies of ascension into the future.
They work with me diverse egègoras of beings and masters, mentors and spiritual guides of diverse known religious slopes. I manifest myself in Old Black, and also in the energy of Xangô, when raised in wisdom and disconnection with the personality represented only of the feminine.