Service to serve and the creation of Fraternities - Sanat Kumara 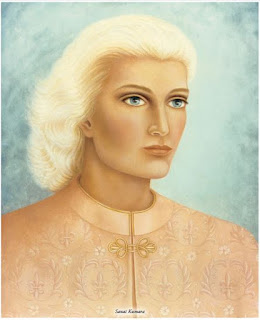 I'm your brother, Kumara. I started the trail of the masters who were on this planet. I've been with you a long time too. I contributed to planetary wealth just as each of you today does.

I opened the spiritual path for the arrival of the great fraternity of masters to planet Earth, I did this by serving, simply serving. It was through the act of serving, that other beings of much light accumulated in their records, followed this path, coming to the aid of all humanity, bringing the Earth the example of love.

Siddhartha, Venus, Maitreya, Kuan Yin, Jesus and so many others who are now part of the Crystal dome, who can be called, to understand, like the high command of planetary light. We have as arms to unite in love the Great White Brotherhood, the Marian command, the Ashtar command, the Arcangelic Kingdom, the Angelic Kingdom, the Brotherhood of Old Blacks and Exus, the Elementals, and so many other realms that today work in unity to Favor of the act of serving through love.

It was enough that one proposed to serve, that one should dignify himself to serve the humanity that could find no way out in the very world he created, so that the magic would be done. Realize, beloved, that it is sufficient for one to open the path of light, so that thousands may come to his assistance, because love radiated in the purer service, manifests itself as an attraction of all universal abundance.

Today we have countless fraternities linked to the High Command of Planetary Light, which today assists humankind by the planetary transition, by the transition from the New Age of Light. And for this, beloved ones, for the miracle to occur, it was enough that I placed myself at the service of humanity With all my love.

Maybe they can not see where they are, but humanity has evolved in light in the last decades like never before. The evolution has been great, and all spirituality today already glimpses the signs of the great change that the next generations will live, that you live, but that I affirm that will intensify, as the linear years pass. This will happen until there is not a single drop to be purified, and the New Age is definitely installed in this magnificent orb.

And all this, beloved ones, came through the act of serving with love. Ah! The act of serving. It lights up the most tense and fearful heart of love. That heart so tired of suffering and no longer believes in the hope that everything will get better.

The act of serving purifies, cleanses, and releases all constraints that hold you back in the past. It opens the possibility of the awakening of love that will give way to the forgiveness of the past, to forgiveness of oneself, to being involved in suffering, in pain. Forgiveness to those who are gone, no longer present in your now happy, but who have shown you a difficult road to follow, for they were the stones of your path.

These are more enlightened now, when you already incorporate the serving into your heart. You leave behind the hurts and the anguish, and manages to direct love to those who are gone. Suffering is no longer present.

You, in the present moment, when you were already accustomed to the pain, and watch closely every new minute of your day, to seek a minimum sign of pain and suffering. But they are surprised when they realize that several days have passed, and there was not even a sign of pain and suffering. You look back and realize that the last days were perhaps one of the most difficult days ever experienced by you, and yet you crossed that bridge with praise. They did not even realize the difficulties they took in their hearts, they were there, but only from the outside of their hearts, and that is why they have passed and will never repeat their experiences again.

You look at these pains of the past, for that suffering, and you feel a certain longing for what was already part of yourself. For a moment they feel alone when they perceive themselves without the cause of the pain.

The record of suffering was illuminated, illuminated by their own inner light, which overshadowed the darkness of the patterns of repetition they had been bringing for so long, to keep the present suffering in their lives as if it were part of you. For a few days you realize the cause of suffering there, lurking, but it is no stronger than the energy of forgiveness and the determination of love.

Charity and self-giving to the work of love opens the door to healing. Or even tear down the walls that would not let them realize that the healing was there, so close to you. And gradually they are deconstructing more and more that Personality Self that was active in their lives, but that no longer finds abode in you, because they are completely given to the love.

So many of you question how to find the way to the I Am. I tell you: There are no ways that do not pass through the road of charity and of giving to others. For from the moment they come to see each other as part of themselves, they cultivate love and forgiveness even for those who were the stones of their path, who begin to overthrow the wall that distances them from the Higher Self.

This is the quest, children. But they would be surprised to know that to reach their goal, the only road to be trodden is that of charity. Of love and the act of donating in a disinterested way. Simply by serving. The act of serving not only overthrows the walls of the ego, but also deconstructs the personality created by matter, for it teaches you that all are One.

You learn to feel love, to be love, to see love received by the other. You stand as channels of light And so that you are pure and clear channels of light, you must give yourself freely and free from the personality, being part of the whole, and looking at that other as yourself, as a part of you, as The one who came to bring about his liberation and the way in which he discovers the so sought after path of ascension.

The total surrender to work with love, brings the possibility of ascension, from the moment they understand their role, which is just to be here, present in the now, and completely surrendered to the Unity, abandoning the Self Personality in exchange for the Love, the opportunity to serve. There is no questioning, there are no arguments, there is only the delivery, in an impartial, clean and pure way, to the opportunity to serve.

And it was thus, beloved, that the Fraternities of Masters were formed, that orders of magnificent beings came to serve them. And each of you can walk that same blessed path, serve and thus leave the trail of light for others to do at the right time, and serve as inspiration for others to fulfill their mission. It is through the example that we dignify our own being, not by words, for serving is greater in all our humility.

I am Sanat Kumara

Source: http://peaceandtransformation.blogspot.com.br/
Posted by Michele Martini at 7:38 AM