The Idea and the Substance - Pai Joaquim de Aruanda 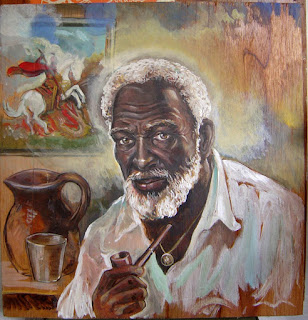 Hail, daughter! Save this father here and our master Jesus Christ.

Father is here, daughter, to talk to you today, daughter.
Are you happy, daughter? Dad's happy too, daughter.

Let's start the week with study, daughter. Let's learn to apply during the week, right, daughter?

It is this: You entered into a cycle that closed to your heart, then matter began to command your behavior. But in fact, children, matter was created by fear, by lack, by constraints. So it is an experience designed in these models. What is the feeling it will generate in those who are attached to it? Fear, lack, restraints. That's right?

But the father is here to say yes, the idea is to be created, children. The idea is real yes. Because in the same way that the idea created matter, the idea modifies the reality that you live. So the idea is much more real than matter.

You are here on this Earth inserted into matter, and so often stop to think, and here comes an idea, an idea that only thinking brings happiness, lightness, hope and joy.

But then you think, Ah, but it's impossible! And soon they continue walking on the subject taking their days of suffering without allowing themselves to create something new. But my children, what would the material be if it were not also malleable? You see the rock and think it is unchanging, but that same rock is eroded by the wind, by the sea, by the waters. Then matter changes, and when you put the force of an idea into it, it expands. Has not the Master Jesus said that thought moves mountains? It is because he understood at that time that the idea manipulated matter, and an idea can change your life.

For then, children, you must rather create from the idea. An idea of ​​joy, of peace, of freedom, is always born within you, and is put out materialized in the world where you live. And it is from this idea that the world changes and moves, for the idea moves mountains, moves the world, and removes it from suffering. It is the idea that will create a world of love that will anchor the new Earth. It will not come out of nowhere, but the idea born from within you, planted in your hearts, what you already have in your hearts, the new. Is not that right, children?

Well then, children, you begin to realize how everything that is idea is real. And all that is matter is illusion. Not that this illusion matter does not exist, children, but when we say that matter is illusion, it is because it was created by fear, by sadness, by envy, by hatred. Because, children, the ideas that linked this material world were these. And the world has generated more fear, more lack, more envy, more hatred within you. Because the world was built on these ideas and you were controlled because of those ideas that are in the world. Do you understand, children? It's like this old father said: the idea created the world and generates more of it in you, but if you change the idea, you change the world. At least your world, is not it, my children?

Matter that you can see with your eyes, children, was created all by the emanation of feelings and emotions connected with the seven deadly sins, and with the fuel of fear to feed all this, and be the materializing vehicle. But if you dissociate yourself from these ideas and anchor the love of the heart, what world will you create? A world of love? Everything inside is not it, children?

All that you live, children, brings suffering because it was created from a yes idea, but an idea born of fear, and putting before you the materialization of the seven sins. And when you purify yourselves (what a beautiful word, purify), you are freeing yourselves from these ideas of the seven deadly sins and your world changes.

Therefore, children, the idea that starts from the heart from the moment they are freed from fear, is what will bring the transformation of this planet, children. This idea comes from the essence of the creator that is within each of you. If you are afraid, you are in the old grid, if you are not afraid, you are in love. Look at the thermometer my children, the fear. Fear tells you what idea you are trapped in. Fear of something: old energy. Feel love: new energy. It's simple, is not it, children, to know where we are.

That is why, children, the masters and the old black here speak so much for you to connect with the heart, to silence the mind, children. For you can only materialize a new life, a new planet, based on the idea that comes from your heart, children. And the father will tell a secret: the heart does not fear. And if he does not fear, he is not proud, he is not jealous, he is not envious. The heart is free because it has already rid itself of all these attachments. The heart loves, does not it, children? Look what a simple thing: An idea, the heart loves, and if it loves, does not fear. That simple.

Therefore, beloved children, when they are inserted in their material means created by the mind and the fear, idealize something new, starting from their hearts. Do not isolate yourself, children. Stay where you are and create the new one right there. With the broken idea of ​​the heart, you gradually transform each one around you and also transform the environment in which you live, children. Because that old father already said: The idea creates life!

Realize the idea already materialized in the lives of you and the planet. Look at sorrow and see joy. Look at hate and see love. When you receive an offense, return it with peace and charity. And so, children, you are creating from the idea born in your heart, the possibility of a new abode right there where you are. You radiate matter with your ideas and change the energy that created matter. The father will say a difficult word: You subtle matter. Is that right, children?

Each of you who is freeing yourself from the web of the planet, and from the limitations that held you to it and the seven sins, can act as a free being to create a new life for all. Instead of connecting again to the matter created from fear, create a new one from the idea that comes from your hearts, children. And it's easy, just look at it all day for what you're feeling. Look, and the heart will tell.

Source: http://coracaoavatar.blog.br/ and http://verdadetransmutadora.blogspot.com.br
Posted by Michele Martini at 3:29 AM