The complementation of the twin flames – Masters Paolo Veronese and Rowena 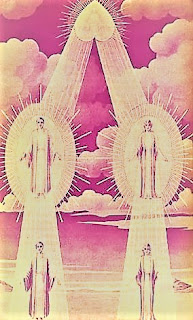 Dear children, I am Rowena, and I come today to teach you how to give the complement of the twin flames, which you know as Ascended Masters in the feminine and masculine aspects.

The twin flames are energies that were unified together with the God-Father-Mother Source, and, as everything in the universe is fluid, they will once again enter into this divine flux of reunion, by reason of the very law of attraction of fellow beings. They are energies that are rediscovered for a unitary purpose that has always been present in their consciences.


Energy, dear children, is unique. Each of the divine complements has an energy with which it works, to promote its own healing and personal development, as well as to contribute to the elevation and complement of treatment in that which is its twin flame.

This energy, though individually unique, unites in a common purpose which is precisely the manifestation of that initial impulse, which the two flames together anchor together at the cradle of God.

But from the rupture of this initial single energy, two aspects are anchored: masculine and feminine. And each one works with a different flame for his own evolution.

In time, my dear children, the two flames come together to form one again. For in the beginning, outside the dual experience, there is no masculine / feminine polarity. There is an energy that has a purpose in creation, for it is the Source itself, in unity and divine perfection. And, after the experience and rebalancing of both, there will again be fusion for elevation in divine perfection.

Communion in a single flame that will bring ascending elevation will occur only from this union. Therefore, dear ones, they learned that some masters had their flames lifted by themselves, then to return and make the divine complement with the united flame that would become one.

The individual elevation will occur in a partial way, but it is from the fusion of these two elements that there is the permission of unification to the whole.

My children, after the apparent separation, creates the fear of losing one's own individuality, however, from the twin flame, you will find a similarity so strong, so present, that fusion will occur almost naturally, without any resistance of integration To the unity of All That Is.

Separate flames work for elevation itself and also for those on whom they are applied. But the union of the two will bring the new. It will bring something never experienced since the separation of the God-Father-Mother cradle. It is something unique, not on the material plane, but rather as the re-encounter in perfection with the electronic flame of our cosmic consciousness. It is the reunion and openness to the true reintegration and dilution of consciousness into All That Is.

For example, what they understand today as the pink flame of love is differentiated when the twin flames work with the feminine and masculine polarities together rather than in isolation. It is as if from this union, if a new color were formed, but an evolution of the pink flame.

They can come together in this way, flames of different rays, just as they understand. That will form a new color, that is, a new energy. And so the elevation of Being is being realized and materialized during the earthly experience. This is the purpose of the reunion of twin flames: to realize an experience that transcends matter. Having nothing to do with human relationships, but being bound to the anchoring purpose of brotherly love and the dilution in perfection to All That Is.

They are 7 major rays, but the multiplication of these will bring 144 new forms of energy of all combinations and that will lead you to work energies never before worked.

This union leads to various forms of treatments and cures, which are unconsciously brought to many of you. Many twin flames already work today without being aware of the depth of the work done.

But know, my beloved children, that you are all here for the purpose of raising awareness and union of the feminine and masculine aspects in search of these new forms of treatment.

The twin flames are always coming from different energies that complement each other to form the new. And when they meet to bring healing through the work of charity of light and love, they can work true miracles.

For miracles, children, are nothing more than the new materialized here on the physical plane that you did not know before, but which is real, and can be brought through the encounter of twin flames, to operate the works of charity on this plane.

Be enveloped in the love and light of the twin rays of the pink ray my beloved ones.

Source: http://coracaoavatar.blog.br/ and http://verdadetransmutadora.blogspot.com.br/.
Posted by Michele Martini at 1:15 AM