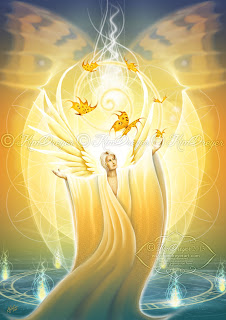 Beloved Children, I am your Protector of the Golden Ray, Archangel Jofiel.

I am here, bringing the balance necessary for some moments, where live healing experiences.

Be alert to the signs of your bodies. Be high in love. Allow us to work on you right now as you read this message.

Raise your thinking to the Top, focus on your Base Chakra (the one positioned in your lower organs) and bring the Golden Light to it. Allow it to radiate vertically, entering the Earth toward the Central Sun. Establish this connection, and command that this energetic thread of the Golden Light remain sustained, as if it were the root that unites you to the Earth and sustain you standing on this planet, on the surface.

Establish harmony with this Golden Energy. Visualize the flow of energy following towards the Central Sun, coming out of your Base Chakra. Allow that connection to happen by keeping your thought there.

Now realize that together with this Golden Light on this thread of connection are brought to the Central Sun also, those accumulated dense energies in dark color tones that are gradually released from the Base Chakra and followed by mixing in the middle of Golden Light.

Stay in this connection until the Golden Light is completely clean, completely golden, without the dark colors in the middle of this Light.

From that moment, implement in your Frontal Chakra (between the eyes, in the middle of the forehead) another golden point of Bright Light and command that it remain sustained at that moment, also maintaining the Base Chakra Light, which goes towards the Central Sun.

Commit so that this point of the Golden Light of the Front Chakra expands, radiating Light throughout your body, and establishing an energetic thread with the point of the Base Chakra. At that moment, it initiates a new flow of energy, which runs through the two Chakras: an established connection between the Base Chakra and the Front Chakra. This energy travels between the two Chakras, passing through all the other Chakras in the middle. The energy comes and goes, forming an infinite flow and yet sustaining the connection of the Base Chakra to the Central Sun.

Allow the energies of all other chakras to be brought to the Base Chakra and from there no longer return in that flow, but rather be eliminated by the Base Chakra to Central Sun in the same initial flow.

Remain with that sustained connection, until there is no more energies to be cleansed, and the Golden Light remain bright and clear.

The connection with the Coronary Chakra allows them to be connected to your Higher Self and the connection to the Base Chakra with the Central Sun. Then, look at each other as if you were "a pawn of Light." A golden illuminated vortex that no longer has its own will, but rather, is totally guided by the Golden Light and the points to which it is connected.

Free yourself in this energy. Let go. Let these connected points carry the energy through your body, and keep it sustained. Command for the connection to remain established and sustained.

This cleansing, in the Golden Flame, will establish the balance of your sacred DNAs, which is unbalanced, as you work your healing processes daily and during your experiences in matter.

The DNA is clean, balanced, aligned in the Golden Light, so that the healing materialized in their lives.

What occurs, Beloved Sons, is that during some healing processes and intense DNA cleansing treatments, you begin to have experiences recorded in your records, which remain misaligned between them. Each healing is treated individually, so when we observe the complete composition of its DNA, we can also see that there are points of imbalance, which simply need to be illuminated in the Golden Light for this alignment to occur.

This process is completely natural, and you can perform it whenever you undergo healing experiences and treatments, so that the final closure and balance is done at the end of each process.

Be involved in the Golden Light.