Engaging the quality of the Goddess's Love - Mother Mary 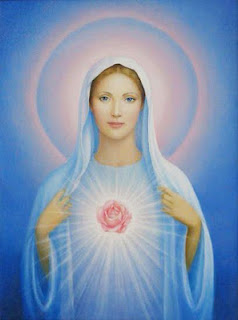 May the blessings of Love bring peace to their bodies, minds and hearts.

I have been given the opportunity to stand beside each of you, dear children, over the past millennia. Together we set out to anchor high aspects of balance on the ground plane.

There was a plan, children, so that we could anchor new energy through my physical life and so many other brothers, who succeeded and preceded me in this endeavor of Love. We sought, through the energy of the Goddess, the energy balance between the dimensional planes of this planet.

For a long time, you have survived, between comings and goings, in a dimension where the imbalance of greed, pride, the search for power and domination of those who were weak and humble prevailed. And many of those who read these words were as much on the side of the dominated as of the dominators, for the imbalance of the world was the fruit of the internal imbalance which they brought in their hearts which in turn flowed from the very restraint of the world.

There is no judgment here, beloved ones, but in the last few centuries we have sought to anchor healing energy to this world that would bring about the rebalancing of energetic polarities, allowing them to bring and couple the energy of their souls in that environment.

Many great beings were in the garment of a physical body, each in the confidence that the progressive anchoring of ancestral wisdoms would allow a new generation, at the appropriate time, to re-establish the balance of this world. Thus the work of expanding mass consciousness was being done by these brave brothers of the Light throughout the most recent history of mankind. All came as missionaries to prepare the environment for the perfect coupling of the primordial quality of Goddess / Mother Love to their world in order to restore the energetic balance of Love with God / Father.

The energy of the Goddess is that which, in communion with the Father / God, unifies the purposes in unconditional Love to all experiences. And you, for millennia, have been in an environment of energy imbalance, in which the energy of the Goddess / Mother has been overshadowed and repressed, causing a great imbalance to all beings that were added to this world, causing on the one hand oppression and, On the other hand, guilt and rancor of the oppressor.

Yes, children, for he who is oppressed loses his essence, but he who oppresses, besides losing, generates great bonds of suffering to his existence. In the end, the balance is a suffering to all involved, as well as imbalance and difficulty to overcome these traumas. A difficult cycle to be reversed.

But it was through the Faith of the Brotherhood that each missionary being present in this world progressively established the basis for reversing this cycle of suffering to which it was inserted. It is a delicate process, for there is no point in suppressing the energy of God / Father by force. We had to plant the conditions so that the energy of the Goddess / Mother, which was given me the mission to sustain it, would find the energy balance needed to develop the expansion of full happiness in this world.

It was through the anchoring of the Christ Consciousness, which is the expanding and unifying energy of the unity of Love, in its simplest and most pure form, that we find the formula of reversion of this cycle of domination by the least elevated feelings. It was by anchoring humility, compassion, internalization, eternal values, that gradually this cycle was reversed so that you, dear children, could, through Love, be the ones who will propagate the Christ energies in this world, To collective consciousness and, as they expand Love, to find rebalancing in opposing poles.

We are counting on many brothers incarnated to help in this planetary mission of expansion and unification of consciousness, in order to allow the perfect and balanced connection of the energies of the Goddess on the earth plane. Christ unifies you in the purest form of the energy of unconditional Love.

There would be no point in this expansive unity of Love if it were not to accommodate them in balance, in a state of inner purification. For this purpose, my children came and call me Mother, because I was given the mission to spread the energy of the Goddess through each one of you, bringing you into my womb of Love so that together we would be reborn In a life of unity and balance.

Call me Mother, my children, for in my heart I received each one of you at the rebirth, for a life of Fullness, Balance, Love, Prosperity and Abundance. Together we have the mission of restoring the conditions, in Christ and for Christ, of Love in balance. This will be the end of the great battles for justice, where pride and greed have placed them as brothers, disputing in an illusory world, for the survival of their physical body, when knowledge of the brotherhood of the soul would suffice so that, in fraternity, support.

And all this long process culminates in this now of its linear time, where the point of equilibrium approaches to unify in the Love of Christ and allow the liberation of everything that restricts them externally, so that, through their inner balance, they can propagate A world of peace and love to all.

I am Mary, your Divine Mother, on this plane, and I shelter you in my Mantle of Protection and Love, as children that I hold in my Heart.