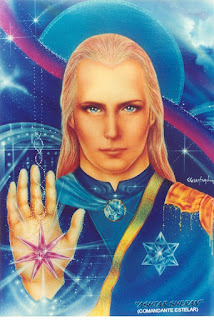 Here is your brother, Ashtar!

I come today to tell you about what is happening in the reality that they experience.

You have seen the great changes your world is going through: in the economy, in finance, in politics, and in the whole structure that governs your lives. You watch and see the crisis. All sectors go through great tribulations and there is no single environment in this world that is totally free from these changes and difficulties.

The energies are moving all the structures of this world, of all peoples, of each culture. There are significant changes in everything they notice. Changes that you can see under a negative prism in the sense that there has been no improvement, but the fact is that nothing else is as before, everything is in a process of renewal.

The dense environment has long had dissonant structures with what humans would like to experience and you have accepted this structure as if it were the only possible reality. You have accepted to live in this structure of absence of personal freedom. The Light, however, showed the possible alternatives and, in the last decades, great changes were created by the collective conscience, in search of improvements of life to all. And now you are entering a time when everything will speed up. The changes will be visible!

So far, you first had to realize that the experience no longer resonated with your vibration, and then began to anchor changes. Now, you will see that the discomfort will lead to great changes in much greater speed, because the process has accelerated and the cleaning will come more and more evident.

I tell you, My Brothers, that you have anchored the necessary energies to this accelerating point! You peacefully accepted many of the restrictions that were imposed upon you, and also ceased to resonate with the energies that led you to the wars, the conspiracies, and the paths you were confronting. Humanity has reached the point where attempts at fighting against one another do not hold up because they do not find resonance in their hearts to be created. You choose to restrict yourself and live peacefully to have to fight. And this is an unprecedented advance from our perspective.

It is Love that takes care of your world. While you see, on the news and around you, the whole governance crisis from the human point of view, you collectively have grown. And despite the numerous false-flag attacks, intrigues between governments, almost desperate attempts to create a hostile environment, you simply do not react to the news and they disappear like "dust in the wind." That is planetary evolution, Beloved Ones. Evolution of a people!

Humanity, with hard labor, understood that it is not by saying that it will conquer what it wants. And that has given rise to a new level of changes. You stay in Peace without even realizing it. And, despite everything they experience at the moment, there is not a single conflict between peoples in their world but the fictitious ones, created precisely to try to lead them on that path. It's a lovely thing to see how fast they did it, to think that a few decades ago they came to the brink of destruction!

Today, they no longer resonate with disputes between peoples and will be able to observe the speed with which they have changed the way of seeing each other. This is evolution, and if you look, you will see!

Love takes care of its world, although the news still tries to show the conflicts that occur. Know that these little incidents are just the proof they need to show that they are different, that they have grown up and are ready for something more: an expanded experience where Love will be the foundation of this planet.

I bless you, brethren, for all that you have done and do.

The change is evident and will be the one that will enable, from now on, the manifestations that will come. It is supporting in peace the movements of challenge, that will be allowing more and more changes to manifest.

There is no more risk of going back to the old man. You have passed the phase of this game of life.