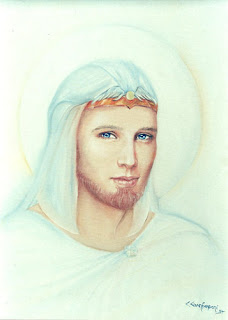 When they came and accepted to enter the three-dimensional game, there was great euphoria, because you knew everything that would be presented. There was a great potential for transformations that would be put into practice.

You have entered into this game and have been modifying it day by day, in a silent work of compassion. A smile, an outstretched hand, a new way of looking, a friendly word, a sincere demonstration of friendship ... These were the acts that this army of landmasters practiced. And you have been anchoring energies and inserting feelings into the collective consciousness. These emotions brought tears to the still closed hearts and opening them to the reception of love.

But you also brought the energy of contestation, because you knew that there were better ways of doing things, of living together. So how often, in a show of love, did they dispute what was, let us say, done in a more rustic way.

It was a quiet work that you did not know about, just felt that there were more of you out there spreading your energy. You felt the family, but the energy of the time did not allow you to recognize yourself.

And this work has been modifying the energy of his world and expanding the consciousness of those who were not yet open to more sublime feelings. You, each in your own way, were showing it, without even realizing what you were doing.

Inside you knew you had something different because you did not understand that way of life. You felt there was something more advanced and, as you could, they were showing it. For in its nature there is a guarded wisdom that comes from other ages, which have come to anchor in this environment.

The energies were changing and you were recognizing yourself. You looked into each other's eyes and noticed those who had a different glow. There was something there. Their eyes met each other, and each one went on his journey in his work of love and faith for a better world.

Then they began to see scattered lines in their world-wide computer networks, and something in those words attracted them. It was the signs of the family that now connected them more deeply and the work gained greater expression, because there were dials joining and telling them to continue to believe. The heart was vibrating again in that initial energy of great euphoria. You felt that something big was coming.

Today, many of you already know each other in the whole world, personally or at a distance, because an energy has united them. The energy of well-wish, the one in her heart that said there was a new way of being, that there was another possibility. Though they did not clearly identify what it was, in her heart was kept that ancient wisdom, where you knew that a world with more love was a possibility.

You were regarded as dreamers, like those who lived in another reality, because that was how you were. No problem in that, because it was his behavior that began to anchor a new way of expressing himself. It was his gestures, his courage to face old standards, to say that there is a better way, but, above all, his ability to remain at peace in the center of his heart.

Ah, this ability to keep in peace is new. That you did not even know they had, because by staying in the center, they show themselves as the devotees of the faith in a better future. The dials of a new model that you brought to this world, in your hearts. Because it is in you that this new is anchored. That's where all the potential for change is that we both talk and talk and repeat. You are my sweet and beautiful guardians.

They do not believe? Look at your life story, you who read these texts. See if your heart is not as we described, with an energy that knows that something big is coming and that there is another possibility. You feel it is a work done every day, anchoring energies in your acts, maintaining faith in humanity, being the example of Light on this planet, showing that there is a new and more advanced way of being.

Because, beloved, being a Lightworker is not picking up a megaphone and going out screaming in the street, no! It is to anchor energy, it is to demonstrate in soft speech a new way of speaking, to have balance in the movements, to be calm, to be an example, is to show that you have something different that is your humility and your compassion. It is having balance until you do not answer. That is to be a worker and that is what they came to do and it is what is changing the whole structure of power.

In this energy, there is no power to manipulate them, because you are authentic and are manifesting what is stored in your hearts. You are indomitable because you believe in what you bring within you.

So, keep exchanging those looks of recognition, knowing that you are in a big family at work, spreading love. Believe me, my armies of brave masters! Do not doubt what you hold within you, because you carry what is most beautiful in this whole world and that no one will ever be

Source: http://coracaoavatar.blog.br/
Posted by Michele Martini at 9:07 AM