There is an interconnection between time, consciousness and events, where everything happens in absolute perfection - Pallas Athena - 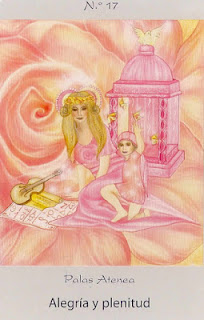 Beloved children of my heart,

At that moment, I would like to tell you about the blessings that hang over your planet. There is a convergence or confluence of circumstances that are to interconnect with each other so as to take their place of merit.

Know beloved, however, that there is absolutely nothing in all creation, which is not in an absolutely perfect flow. Even you, when you put in resistance, are flowing, because although they are bringing everything more slowly, this is the perfect time. I tell you that nothing, there is absolutely nothing that is not occurring in all divine perfection. This is because divine timing is perfect. It is not advanced or late, but it is done with absolute perfection. Thus, the facts that are modifying your world are in a perfect flow next to the time in which they are inserted.

Dear friends, as I said, humanity needs to be prepared to absorb the ideas that are put to them, for consciousness only supports what is palpable within the consciential reality that each is.

But I tell you that even the opening of consciousness is given as the new arrives and the old dissolves. Look at the changes. At first, they frighten, but at the same time, they cause curiosity. Then, in a way, fear drives them forward. The same feeling that often blocks them is what drives them ahead. That's because, every feeling has its counterpoint, its opposite side. And fear provokes curiosity about the new reality. This is duality: one feeling leads them to the other, as if both were two vortices of the same fact.

How many of you have been frightened and at the same time have continued to peek behind something to know what was happening? Do you see how one feeling leads to another? At the same time that this new awaken the fear of change what comes next, it arouses curiosity about living a new experience.

So, this duality of feelings progressively leads to expansion, but it is as if one were the accelerator and brake the other, to make it all give the perfect time! It is such a perfect process that it allows your consciousness to have time to absorb the new and take the next step. For otherwise there would be such a shock as to take them out of physical reality. So you must face it progressively, because you are seeking expansion. And in so doing you will be releasing the events in your world. As your consciousness expands, new events are brought to your consciential reality, but, suited to your vibration. In this process, gradually and at the right time, consciousness assimilates the new reality to free the old. This is what is demanded of the masters on Earth: the liberation of the old through the evolution of consciousness.

See, beloved! There is an interconnection between time, consciousness and events, where everything happens in absolute perfection. Everything within the plan drawn by the creation and will of our Father. There is no anxiety, therefore, about the events, because if they want to accelerate the work it is a search for expansion, which must be done with courage and sincerity.

The greater the openness to this new consciousness that anchor in their world, the greater the speed they will be to liberate external events, in divine perfection to all that is. You bring the keys to deliverance from everything that comes to you and only you can do it.

The path is traced. It has already occurred and need not force anything, but, yes, just accept, release, that everything will come to the most absolute and perfect time.

I am Pallas Athena, and thank you for the time given to the expansion of your consciousness. This is what will make everything that you anxiously await come to fruition in your world.

Posted by Michele Martini at 9:24 AM