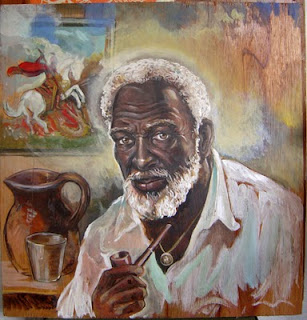 Who was him? It was he who passed through the narrow door. But if she became narrow and he was great, how then did he pass?

His greatness caused the narrow door to pass. Narrows do not pass through the narrow gate because she is one of the great.

The straits go together to the great door. They walk en masse! The great ones walk alone, then they reach the narrow door and through it they pass.

In the narrow door the strong heart is that it draws close, because it has courage to its destiny to face. It was large and in its greatness until the narrow door alone arrived.

How many straits did she try to reach, but ended up forgetting about love! They turned aside, and the rest went to the wide door.

This is Father Benedito, of the Angolan people, a man of great heart, of greater soul, who does not follow the crowd. Followed the love and in his humility the narrow door alone went.

There he passed by it and in its greatness paradise found, just behind the narrow door.

Save the people of Angola, save the suffering people, who were great and through the narrow gate passed, where the Lord welcomed them with their love.

Be in peace, happy holidays.

From the people of Angola

Source: http://coracaoavatar.blog.br/
Posted by Michele Martini at 9:33 AM