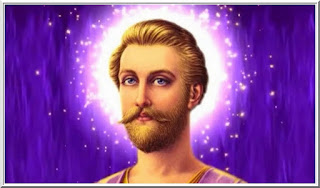 What a great opportunity to meet them is offered me, to bring energy and knowledge to our mutual aid! Know that I bring those words into this now of your time, not only for your help, but on my own as well. After all, it is not at all the moment that I have the possibility to meet them, great masters, open-hearted to exchange the sacred energies that they bring in their beings. This is a great opportunity that I am very happy about.

I also bring a huge love that I hold in my heart for you. It is a love incomprehensible to your consciousness in a state of temporary limitation. Love also for the trajectory that travels from transmutation of the whole planet to the highest spheres of consciousness.


They set off from a dense, dark spot from which the horizon could not be seen directly ahead. It was a dusk without light to illuminate it. They arrive at a point where the horizon is evident, luminous, radiant, dominated by the benevolence of the energies of transmutation.

The world is rapidly transformed and is bathed by energies that bring you ever closer to a state of expanded consciousness, in which you will no longer have doubts about all the magic and abundance that already permeate your beings in love, aid and benevolence.

My masters, we hold extremely subtle vibrational energies, which we can already irradiate them to their world, because of the energetic level that they are sustaining. We radiate them in aid of the mission they once accepted and in love and commitment to creation and ALL THAT IS. We also have help from heavenly beings from all over the cosmos, just to support them. It is a process of unimaginable proportions to its present level of understanding, for the grandeur it represents.

In this benevolent work, your world is, let us say, sanitized, cleaned of the old, obsolete patterns of energy that have become accustomed to living together. Their bodies are being transmuted so that they can sustain ever more subtle loving energies, in benevolence to their beings and all creation. For this reason their consciences are decompressed, progressively accepting higher standards and beneficial to their world.

They come to recognize themselves as deserving of something better, something that is in keeping with their current vibrational levels of being. They are recognized as children of the creator, worthy to receive all the wealth that He offers to his children. The old man becomes uninteresting because he simply does not resonate with his beings. And thus, by taking the focus of these ancient elements, they simply cease to exist in their worlds, in their realities.

Of course, for a moment, they pass through an existential void, where the old does not resonate and the new one is not yet fully implemented. But the important thing is that they already visualize the new, while the old one says nothing more.

Look! As consciousness expands, the old becomes uninteresting, obsolete, annoying, (laughs), causing them to look for new ways. This search unleashes the creative energy they bring with their beings and thus creates a new reality.

My breast fills with joy, for I can present you with this simple process to which you are rekindling your own creative energies, visualizing new and better ways of being, of doing things. This simple visualization, in communion with the will of the heart, that which truly resonates with its beings, transmutes the old forms simply by no longer accepting them in resonance. They recognize themselves as deserving of something better and are beginning to create a new and better world of peace, understanding and abundance.

As they expand consciousness, they increase their vibrational levels, and everything that has been built under the support of dense and obsolete energies that caused them to contend with consciousness begins to collapse. And this for a simple reason: they have changed their focus because it no longer resonates with their beings, it does not bring them more interest.

It is all much simpler than they conceive, but not less magnificent and majestic. It is creation, for the sake of the creator, presenting all its divine perfection. And you are at the center of this process, teaching all of creation what it means to be a teacher of your spiritual source.

Yes, dear ones, do not underestimate yourself! To perform such a beautiful and magnificent work without having access to the totality of your consciousness is only for those who sustain a strong heart, full of faith, love and benevolence. That is why they have been chosen, because they have the most secure sources of all creation, bringing them into their hearts.

So much so that, in the face of all the density and restraints of all sorts they have faced, they have never lost the sacred source of their being, which is held in their hearts. They never ceased to look at the flame of God in their hearts, which is still burning and radiant. And today they can beat their breasts hard to shout: Look here! Look where I came from! What I did, look at this! And in that there is no pretension or arrogance, because what they did was great.

From our perspective, today we see them, my beloved ones, as great souls, far greater than we imagined them to be when they agreed to make that commitment. And so I thank you, because I only took a spiritual position in this beautiful process because I knew I could count on you, the best! Those chosen because of the unique and irreplaceable gifts they sustain.

Thanks to the work they do and the flame they kept burning in their hearts, very soon they will see wonderful manifestations in their world. You will see! And I would not say that in false, not even, because I AM WHAT I AM! And I want you to know that everything is fine, indeed, in all creation!

I am Saint Germain and therefore I ask you to accept this truth that I present to you!


Source: http://coracaoavatar.blog.br/
Posted by Michele Martini at 4:43 AM